Get the most out of SoftMaker Office for Android 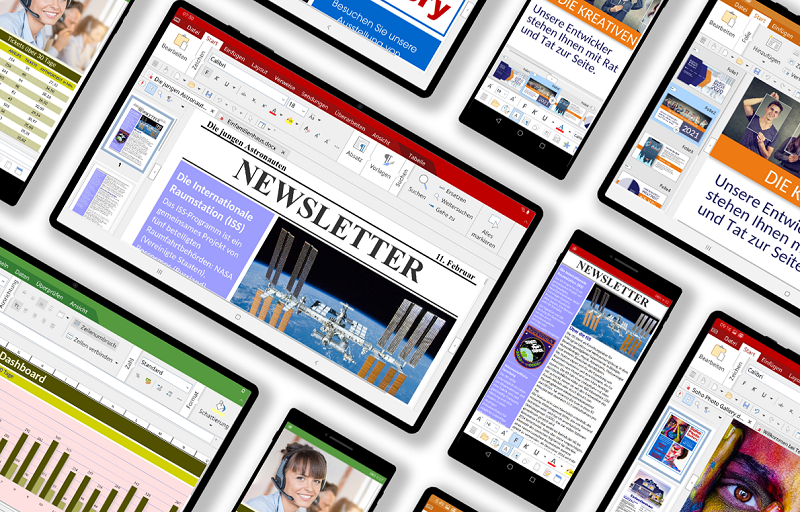 SoftMaker Office for Android consists of three apps: the word processor TextMaker, the spreadsheet program PlanMaker and the fully-featured presentation program Presentations. Competitors tend to restrict the feature set of their Android apps. In contrast, SoftMaker Office does nearly everything its desktop siblings can do. However, there are some minor differences, which I will discuss below.

The Google Play Store offers SoftMaker Office for Android split into three separate apps, thus requiring three separate downloads. If you would like to install all apps, I would recommend that you download them via a Wi-Fi connection.

The size of the downloads depends on your specific device – PlanMaker weighs roughly 73 MB, Presentations weighs 90 MB and TextMaker weighs 96 MB. The easiest option is to download them via the developer's page in Play Store. Most functionality in all three apps is free of charge.

On a smartphone, SoftMaker Office launches with a very reduced interface: a short toolbar with a row of icons at the bottom, that's it. Bar one, the buttons open a secondary toolbar bar with the most frequently used tools displayed on top of the main bar – think of it as a "Thin ribbon" interface. The left-most icon opens a traditional menu to access the software's complete feature set.

TextMaker additionally displays a red circle with a pencil icon in the lower right-hand corner. This button switches the display mode to "Continuous View," which dynamically reformats documents to the width of the screen.

One of my pet peeves with Android is how tedious it is to cut, copy and paste text to another location. The SoftMaker developers found an ingenious way of leveraging the best of both worlds. Selecting text works as it does everywhere else on your smartphone: First you double-tap on a word, then drag the native Android selection handles to expand your selection.

For the next step, you usually have to long-press one of the selection handles until a popup menu shows up – if you fail to hit the right spot, you lose your selection and you have to start over. SoftMaker Office does it better: You tap on the editing button of the main toolbar, then select the appropriate icon from the secondary toolbar. I find this much easier and far more efficient.

On a tablet, SoftMaker Office launches with the same ribbon interface as the desktop version. There's an additional wrinkle, though: To save space, icon groups can be collapsed and expanded by tapping on their labels. Users who prefer a different look can switch the interface mode with a couple of taps on the screen.

The default smartphone mode is called "Toolbars: Modern theme," the default tablet mode is "Ribbon: Modern theme." A nice touch: When you change the interface mode in one app, the other apps will follow automatically. 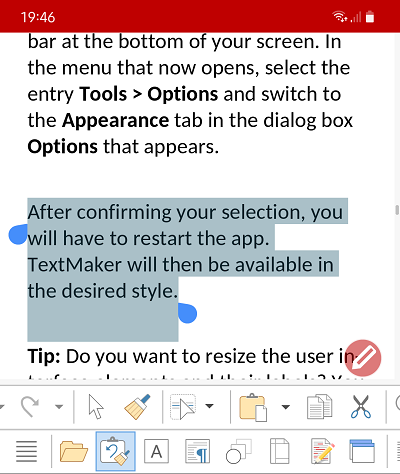 SoftMaker's solution for the iffy copy and paste functionality in Android is ingenious: You select text with your finger, then pick an icon from the toolbar to copy and paste.

SoftMaker Office for Android manages to duplicate almost all the features of the desktop versions. It's all there: full support for DOC, HTML, RTF and ODT documents, creation and editing of password-protected .docx documents and text fields, table formatting options, bookmarks, automatic SmartText completion, full support for charts and drawings, and (on tablets) handling multiple documents at once.

On the product page, SoftMaker maintains a comparison to the feature set of the Android versions of Docs to Go, Google Docs, Microsoft 365, OfficeSuite Pro, Polaris Office Premium and WPS Office. Click on "Comparison" at the bottom of the page to see the tables. Wouldn't you know it: SoftMaker Office for Android comes out on top every time.

How to best use SoftMaker Office on the go

The optimized toolbar makes it easy to copy, cut, paste and format text. However, if you are going to create and heavily edit documents on your smartphone or tablet, you will want to use external accessories such as a Bluetooth keyboard or a keyboard cover.

Personally I always carry a double-hinged foldable Bluetooth keyboard in my backpack – it's roughly the size of a powerbank and the ideal tool to write or edit text on the go.

Almost all features of SoftMaker Office for Android are free of charge. A few extras are only available through a subscription. Subscription features include direct printing, export to PDF and EPUB, track changes and the ability to send documents directly from the app.

The monthly subscription price is a reasonable €/US $0.99 for all three apps together. SoftMaker Office NX subscribers receive all extras at no additional cost: They only need to enter their regular product key in the Android app to seamlessly enjoy the full functional range across all platforms.

It depends on OS version, but here are the steps:
1. Press and hold xls file.
2. From the opened menu, select option Open with another app.
3. In the listed apps, select PlanMaker and also check the option remember my choice.

In the above steps, some wording may change, so please select accordingly.
Reply

Raza Zaidi 2021-09-21 17:35
Softmaker for Android is the best productivity app ever produced, period

If only they could add Onedrive support would be wonderful
Reply

Jon Crawford 2021-06-28 06:23
Sadly for me the newer Android version was a non-starter. It used to work on my Intel based Chromebook when in Beta, but Softmaker decided to pull the plug on that. The Linux version is fine but it can't see the entire Chromebook drive without giving access via the Files app - I want to use my "external" SD card but ChromeOS is a pain and keeps losing the contents without a reboot. Another device I have is a Planet Computers Cosmo; a small clamshell Android device with a built-in keyboard. That would be perfect for Office, but... for some reason the cursor keys double-shift in all Softmaker apps. Other apps are fine, it's just the Softmaker apps that have this issue. I have reported this but have heard nothing. The only device that the Softmaker Office for Android apps work fine for me is my rather old Sony Xperia Z4 LTE tablet.
Reply