What's in the Anniversary Update? Find out in this article.

While current versions of Microsoft Word have not offered any functions for scanning images for several years now, we have once again significantly extended the scanner support in SoftMaker Office with the Anniversary Update.

In response to many customer requests, we have now integrated scanning via WIA (Windows Image Acquisition) in addition to the existing TWAIN support. SoftMaker Office now works with practically all scanners, and users of the 64-bit version of our software will be excited to hear that they can access their scanners now as well using WIA.

The new WIA support has the added benefit that it also lets you scan multiple pages in one step. In TextMaker, a separate page is created for each scanned image. Presentations places scan after scan on new slides. In PlanMaker, the scanned images are simply stacked on top of each other in the active document.

Compatibility has also been improved in other places – for example, you can now add a "negative" crop to images in documents. Just like in Microsoft Office, you can use Picture | Cropping not only to remove unwanted areas from an image, but also go in the opposite direction to add a wrap margin to images.

Users who prefer the classic interface with menus will immediately notice an improvement: The Anniversary Update offers a set of redesigned toolbars that significantly facilitate access to numerous functions.

The dropdown element Insert | Character has been enhanced with new typographical characters and made more user-friendly: If the mouse pointer is positioned over an entry, a tooltip displays the technical term as well as the Unicode value of the character.

Entry of Unicode characters has also been simplified in SoftMaker Office for Windows: If you hold down the Alt key, you can now insert characters with Unicode values higher than 255 using the numeric keypad. For example, use Alt+8364 to insert the Euro symbol.

You can use the key combinations Ctrl+F12 and Ctrl+Shift+F12 to quickly switch between ribbon tabs.

In addition, numerous translations of the user interface have been updated and SoftMaker Office is now also available with a Polish user interface for the first time.

Users who work on French documents will also be pleased: When French text is entered, protected spaces are automatically added to quotation marks, question marks, exclamation marks, colons, and semicolons.

With the new function ? | Support, you can contact our support team directly from inside SoftMaker Office (classic menus: Help > Support): 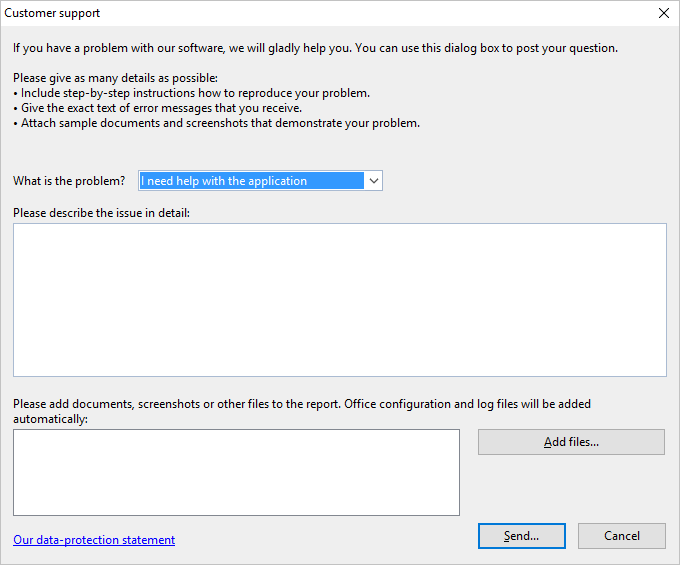 In this way we can answer your questions more efficiently than before.

In the rare event of a program crash, you can now send your crash report directly from the application without having to have an e-mail program installed.

Print selected text: Previously, you could use TextMaker to print complete documents or certain pages of documents. The Anniversary Update adds another printing option: printing the selected text. To do this, simply select as many lines of your document as you like, choose File | Print and select the option Selection in the "Print" dialog box: 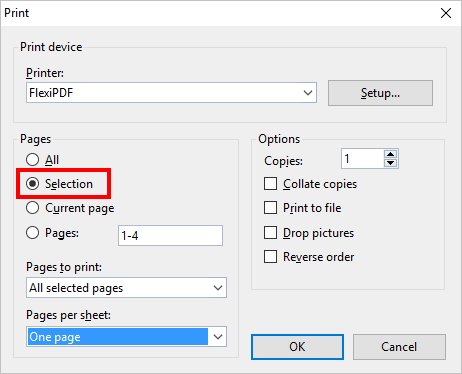 Then only the part of the document that you selected before is printed, including embedded images and objects.

Incidentally, you can also export selected text to PDF.

Calculate with rounded results: The option Precision as displayed has been added to the "Calculate" tab of the File | Properties command. When you activate this option, calculations are always continued with the visible accuracy of cells:

Improved AutoFilter: The AutoFilter of PlanMaker has been enhanced with helpful functions. It now offers a hierarchical grouping of dates:

It has also been extended to include additional options for filtering dates, numbers and text.

Insert copied cells: When you copy cells to the clipboard and paste them somewhere else, the regular Paste command overwrites any existing cell content in the destination area. With the new command Insert copied cells, PlanMaker makes room for the pasted cells by pushing the existing cells either down or to the right:

Multi-column formatting of text in presentations

This lets you create "real" multi-column layouts without having to resort to using multiple text frames or tables. Of course, your files still remain compatible with Microsoft PowerPoint.

However, this blog article can give you just a glimpse of the new features. Explaining all features here would be beyond the scope of this format. For those who want to know all the details, this page gives a complete list of the changes.

As always, we are looking forward to your feedback, ideas and suggestions in the comment section of this blog. Thank you for taking the time to read this article!

B. Kornberg 2019-07-17 23:44
I will immediately switch to SoftMaker Office as soon as you support the Mendeley. Please do it, we are looking forward to it.
Reply

Roger 2019-07-15 09:49
Good morning,
I recently received an offer to upgrade from Office 2016 to 2018 at a discounted price and would now like to take advantage of the offer, but the link returns a 404 error page.
When I follow the My Account links to my upgrade options I only see the standard prices quoted.
Any ideas, please?
Reply

SoftMaker 2019-07-15 11:20
Sorry for the inconvenience. We repaired the link and everything should work fine again.
Reply

Many thanks,
Jan
Reply

SoftMaker 2019-07-01 07:25
Hello Jan, thanks for your comment. By default, SoftMaker Office 2018 for Windows keeps itself up-to-date by automatically downloading service packs from our servers. If you already had the 64-bit version installed on your system, it probably has updated itself to the latest revision (962) already. You might want to have a look at your revision number. You can find it in TextMaker, PlanMaker and Presentations under "? | About" ("Help > About"). If you can read "rev 962..." there, your Office is up-to-date.

If you have not installed the automatic update tool or simply want to know if your version of SoftMaker Office is current, you can also check for updates manually.

If you like to install the 64-bit version of the latest revision (containing the anniversary update) manually, you can find the installer for SoftMaker Office 2018 for Windows under www.softmaker.net/down/ofw2018_64.msi

Under Linux, you can install the update using our repository.
For details, see www.softmaker.com/en/tips-linux

Under macOS, you need to install the latest version of our Office suite manually:
www.softmaker.net/down/softmaker-office-2018.pkg

If you need further assistance with the update, please contact our technical support team:
www.softmaker.com/en/support-assistant
Reply

Diego 2019-05-09 23:04
I bought the license of SoftMaker's office package and was surprised by the practicality of the product, I really liked the interface.
But I did not like the dictionaries for Portuguese Language !! He is very weak for those who have professional jobs to do!
You could include in the next updates a decent Portuguese dictionary, because the one that comes with your product is very outdated and does not work!
With all due respect, but this attitude of having a support to the Portuguese Language so bad is, without a doubt, a disrespect with the client !!
Improve it!

SoftMaker 2019-05-10 08:02
Hello Diego, Thanks for your comment. We are glad to hear that you like the user interface of our software. Unfortunately, you didn't mention any details about the issues you encountered with our Portuguese dictionaries. If you would like to share more details with us, please send them directly to our technical support team. This makes it easier for us to review your inquiry. You can reach our support either directly from inside SoftMaker Office 2018 ("? | Support") or by using our support form:

Maybe you also would like to have a look at our Hunspell dictionaries which you can install alternatively:

Yeoman 2019-05-09 16:38
When will Zotero integration be available in linux version of SoftMaker Office? I've seen an official reply elsewhere (softmaker.com/.../...), but no clear time table was declared.
Reply

Pawel 2019-04-17 20:00
I don't see any differences between Home and Professional editions, except for Berlitz dictionaries. If I buy the Professional edition offered here (I assume it's the only one offered in the Anniversary edition), will I be able to purchase updates for the Home rather than Professional version?
Reply

SoftMaker 2019-04-18 07:35
In addition to the features of SoftMaker Office Standard (NX Home), SoftMaker Office Professional (NX Universal) offers the Berlitz dictionaries for reliable translation from/to English, French, German, Spanish and Italian. Plus, it allows Administration with more than 240 group-policy objects which is helpful for system administrators.

SoftMaker 2019-04-18 13:16
Please let me help you differentiating between the different versions of SoftMaker Office.

If you do not need the additional features of SoftMaker Office Professional / NX Universal, the Standard / Home version might be the right choice for you.
Reply

[Under Windows, the update ususally gets installed automatically.

Under Linux, you can install the update using our repository.
For details, see www.softmaker.com/en/tips-linux

Under macOS, you need to install the latest version of our Office suite manually:
www.softmaker.net/down/softmaker-office-2018.pkg

If you need further assistance with the update, please contact our technical support team:
www.softmaker.com/en/support-assistant]
Reply

Bill 2019-04-14 17:20
One long-overdue functionality for Presentations would be compatibility with conversion/publishing addons, such as iSpring, Articulate and such. Been waiting for years for such, but it never arrives.
Thanks
Reply

SoftMaker 2019-04-15 15:33
Thank you for your suggestion that we already have forwarded to our product management.
Reply

SoftMaker 2019-04-15 15:27
If you need assistance with the update, please contact our technical support:

SoftMaker 2019-04-15 15:20
Thank you. We are glad to hear that you like the improvements. We offer Portuguese translations of our software, our website and our blog... May we ask you for what exactly you are waiting?
Reply

When can we expect this?
Reply

SoftMaker 2019-04-15 15:06
Supporting movies and audio files under Linux is already on our wish list for future versions of Presentations. Please note however that we cannnot provide you with a timeframe yet.
Reply

Gary Headrick 2019-04-11 20:09
I have Softmaker 18 and clicked on the update in textmaker. It said there was none. What is the link to get the anniversary update?
Reply

SoftMaker 2019-04-11 15:11
Thank you for your comment. We'll forward your suggestion to our product management.
Reply

SoftMaker 2020-11-01 12:09
Yes, we have user interface in Finnish language also and you can use SoftMaker Office to create documents in Finnish.
Reply

Cosmin 2019-04-11 08:12
Congratulations! Still not completely translated to Romanian, though. Is there any progress for this task? I offered myself to complete the translation, but I was told that there are translators already working at the Romanian language.
Reply

SoftMaker 2019-04-11 10:18
Unfortunately, the Romanian translation has not been finished yet. It will be published with one of the next service packs though.
Reply

Xapie 2019-04-10 20:22
When are you going to add the capability in PlanMaker to read values from a text file directly into a cell?
Reply

SoftMaker 2019-04-11 10:30
Hello Xapie, there are two ways to achieve a similar behavior with the current version of PlanMaker: You can either write a BasicMaker script or you can convert the text file into a XLSX/PMDX file and access the values using external references.
Reply

SoftMaker 2019-04-10 19:22
Mikael, the translator delivered the translation one day too late. It will be in the next service pack.
Reply